We went to Manhattan on a Saturday night.  We took the PATH to 33rd and walked over to 30th Street and 10th Avenue, the end of the new section of the High Line Park.  This is a fabulous urban park that was developed over the last several years on an abandoned raised railway platform that runs along the west side of lower Manhattan.  We have been to "Section One" several times during past visits, but "Section Two" just opened a few weeks ago.  It's a wonderful example of landscaping that incorporates the urban environment.  It's immensely popular.

After walking the High Line, we walked over to Risotteria in the Village.  John had given Mark a gift certificate for this restaurant.  They specialize in gluten-free Italian fare.  We had a wonderful meal, and then headed to a nearby park to sit on a park bench and enjoy the evening.  New York knows how to do parks right -- you never have to walk more than a couple of blocks to find a spot of greenery with benches and usually one or more sculpture.
Posted by Mary at 12:25 PM No comments:

Queens for a Day 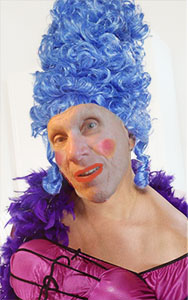 Today we took the subway to Flushing Meadows in Queens.  This is where Citi Field (Mets) is located, as well as the Billie Jean King National Tennis Center (U.S. Open).  Flushing Meadows Park (and the adjacent Corona Park) is large park that includes sculptures, a museum, soccer fields, pitch-and-putt golf course, an art museum, and a fantastic science center and playground.  We spent a couple of hours walking through the parks.  There were a couple of really interesting exhibits at the museum:  one was a "panorama" of New York (all five boroughs) that was created for the 1964 Worlds Fair.  It was a 3-D model of the city, and it took up an entire room; there was an elevated walkway all around it so that you could view it from all sides. See it HERE.  The other interesting exhibit showed the watersheds for the New York area (also a large 3-D model.)

Then we headed over to the Corona neighborhood of Queens to get an Italian ice from the Lemon Ice King.  (I had lime and Mark had banana/strawberry, with real bits of fruit.)  We sat in the shade in an adjacent park and ate our ices.  Then we hopped on a city bus and went to Chinatown in Queens.  This Chinatown is huge, second largest in the U.S. (San Francisco is the largest).  It was like we were transported to another country.  Bustling sidewalks, Chinese signs, Chinese being spoken almost exclusively by those there, unusual sites and smells.  We didn't stay very long because we had been walking a lot already that day.  Took the subway back to Manhattan.  It's not really a subway as most of it is above ground, giving us a chance to see other neighborhoods in Queens.
Posted by Mary at 10:38 PM 1 comment:

After dinner, Mark and I decided to walk along the waterfront to Hoboken.  Within minutes of leaving the building, a storm rolled in.  We, and almost all of the other people along the waterfront, hurried back to the apartment buildings.  There was a long line for the elevator, filled with people, dogs and strollers.  After we made it up to the apartment and closed the windows, the rain stopped.  We decided we'd try again.  As we left the building, a rainbow appeared over Manhattan, ending at Wall Street, or "the pot of gold".

We walked down to Hoboken, which is about a mile away.  There's a beautiful old train station there.  The entire area of Newport and Hoboken used to be a rail and shipping hub.  We walked out onto a large pier/park on the Hoboken waterfront and got a great view of mid and upper Manhattan.  The rain brought cooler temperatures, and it was a beautiful evening for a walk.
Posted by Mary at 10:23 PM No comments:


Today we rode from our apartment, up the Hudson River on the New Jersey side, across the George Washington Bridge, and down the Henry Hudson Greenway in Manhattan, all the way from 179th Street to the World Trade Center PATH station.  Click here to see a map of our route -- all 30 miles of it!  It was a challenging ride, but it was on my list of things I wanted to do while out here, so I feel like I really accomplished something.  For a person who is afraid of bridges and water, I'm spending an awful lot of time around them.
Posted by Mary at 3:51 PM No comments: